Inscribed in Greek on the urn, translates as ‘Is it not excellent water’

A marble version  of 'Your Good Health' was exhibited at the Suffolk Street Galleries in 1867 priced at £100, according to Richard Barnes in his book, 'John Bell, the Sculptors Life and Works', 'Your Good Health' was either bought or given to Sir William Hooker, director of Kew Gardens as thanks for his help in arranging specimen plants from the Americas when he was working on his America sculptural group for the Albert Memorial.

Sir William Hooker died in 1865 so it is unlikely he received this marble version, a theory is that the marble version was the one that Bell kept for himself as it may not have sold at the Suffolk Street Gallery exhibition. The marble version which is the only one currently known, is now in the Norwich Castle Museum.

According to Ray Desmond's book ,'Kew, History of the Royal Botanic Gardens'  - 1863 'The sculptor John Bell made a fountain for Kew with the figure of a child raising a shell to its lips'

This is backed up by Michael Hatt in his 2016 essay,  (John Bell’s American Slave – Sculpture Chains and the Armstrong Gun) where he states that the fountain was commissioned by Joseph Hooker the director of Kew  (son of Sir William Hooker).

John bell would have had the commission prior to 1863 and made the statue, it would have originally been in plaster from this master plaster either a mould could be taken to cast in terracotta or it could be measured off and carved in marble.  The marble version is 96cms high and if carved directly from the plaster would account for the shrinkage in the fired terracotta version.  My theory is that Bell was hoping for an order of several fountains, Kew gardens is a large park and one public drinking fountain would not be sufficient for a visiting public. The record at Kew states 'a fountain' so we can assume it was just one and it’s whereabouts is unknown.

I believe that the Kew fountain was to be terracotta and the marble version was kept by Bell for himself. The marble version has weathered over the years and a little detail has been lost, including the inscription on the urn. this terracotta version has stood the test of time with all detail intact it appears to have been kept under cover. The terracotta version clearly shows the cup as a scallop shell the same as the Kew description.

The fountain we have was possibly a prototype to show what could be done if it was put into production, Kew may have had a terracotta fountain that was destroyed by weather or lost in reorganisation.

This piece is inscribed  ‘C. Stoatt’, Charles Stoatt was Bell's lifetime assistant and carved marbles and made reduced sculptors for the Minton factory. He  became Bell's assistant in 1851 and worked with him until Bell's death in 1895. A space where a plaque was once fixed is now sadly missing, it came from the same collection as the other piece we have  by John Bell, ’Dorothea’.

Condition, a small chip on the shell cup and small chip to a leaf, two minor hairline firing cracks to the side of the neck, otherwise in perfect condition. 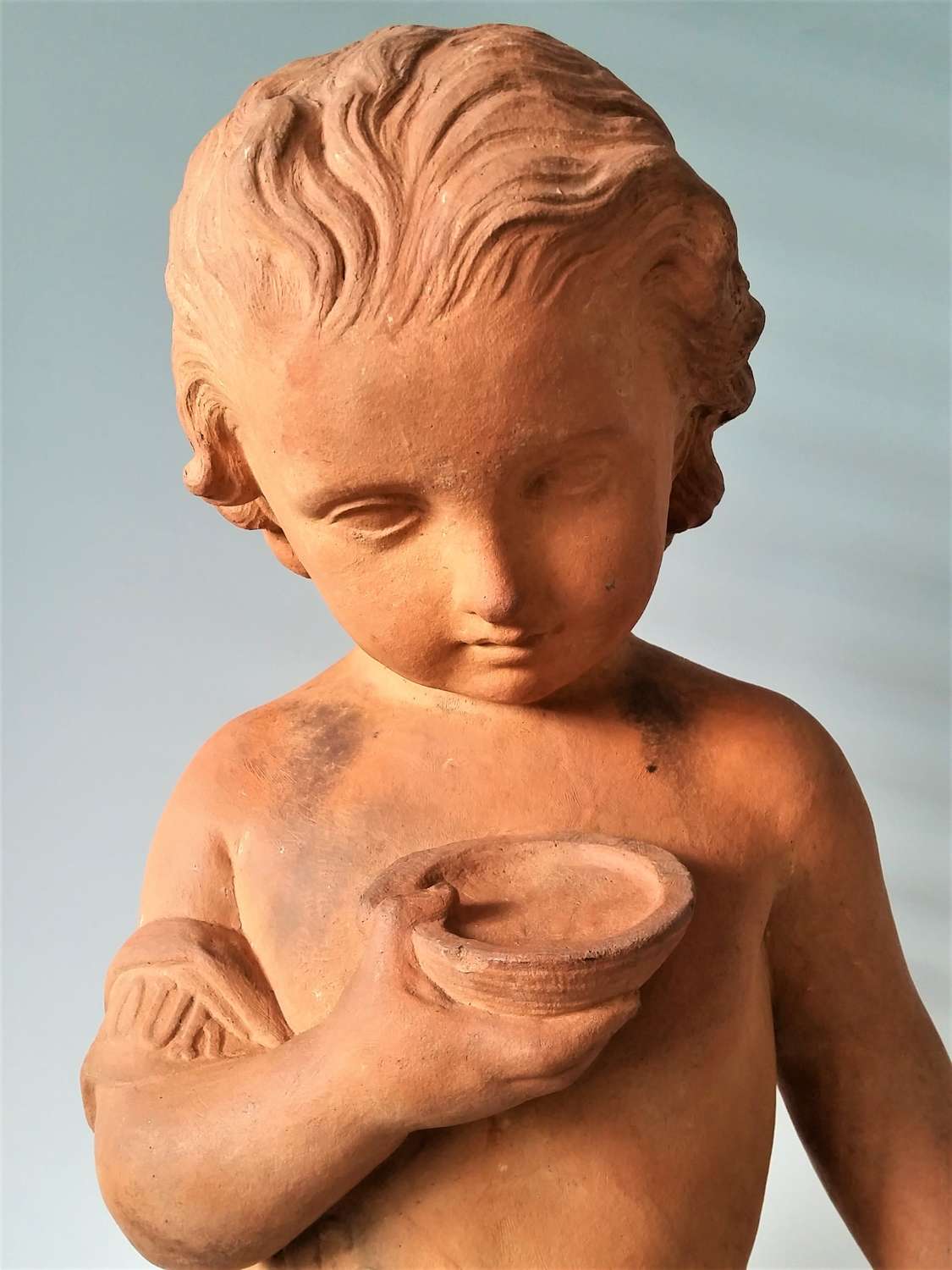 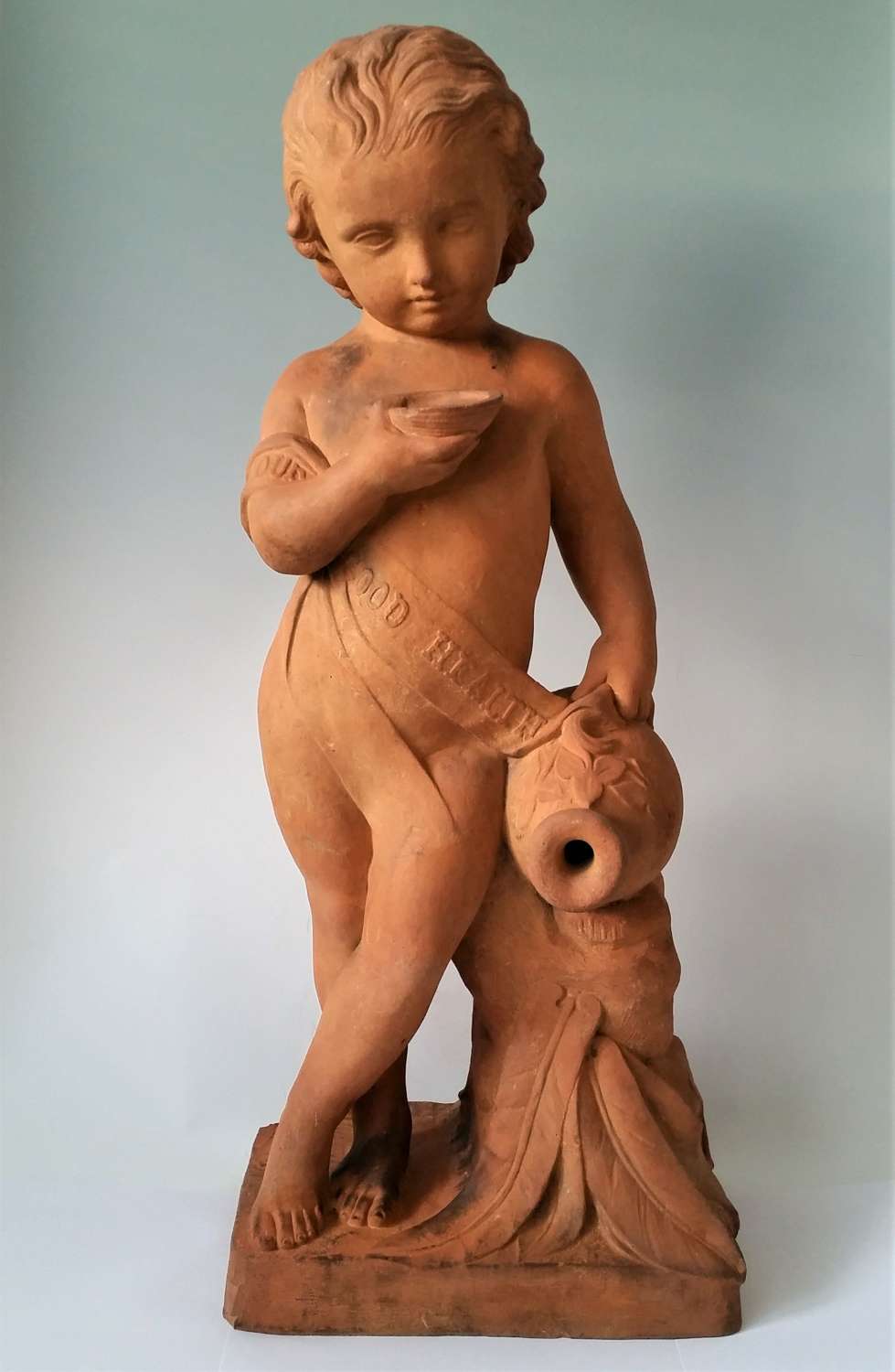 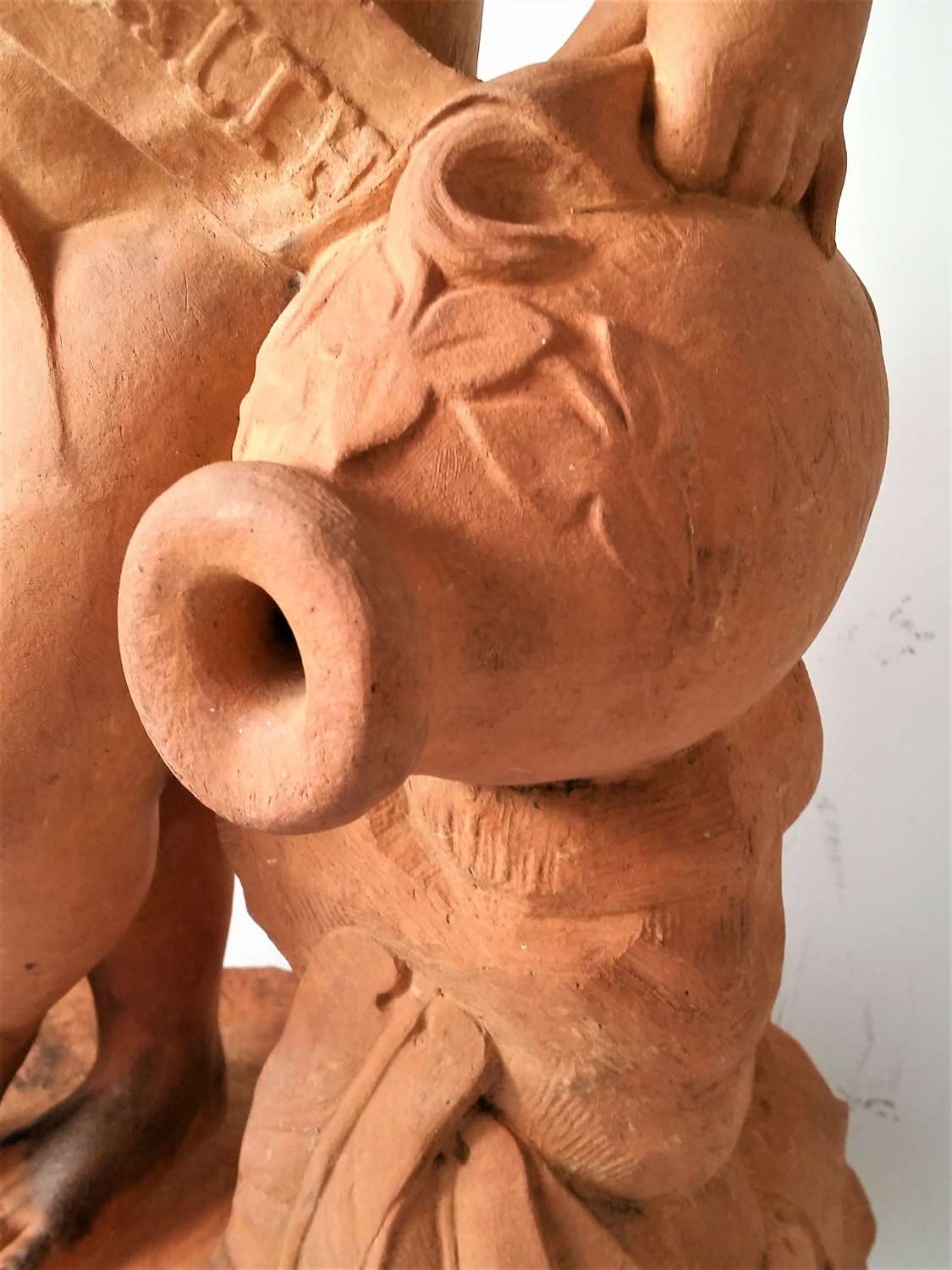 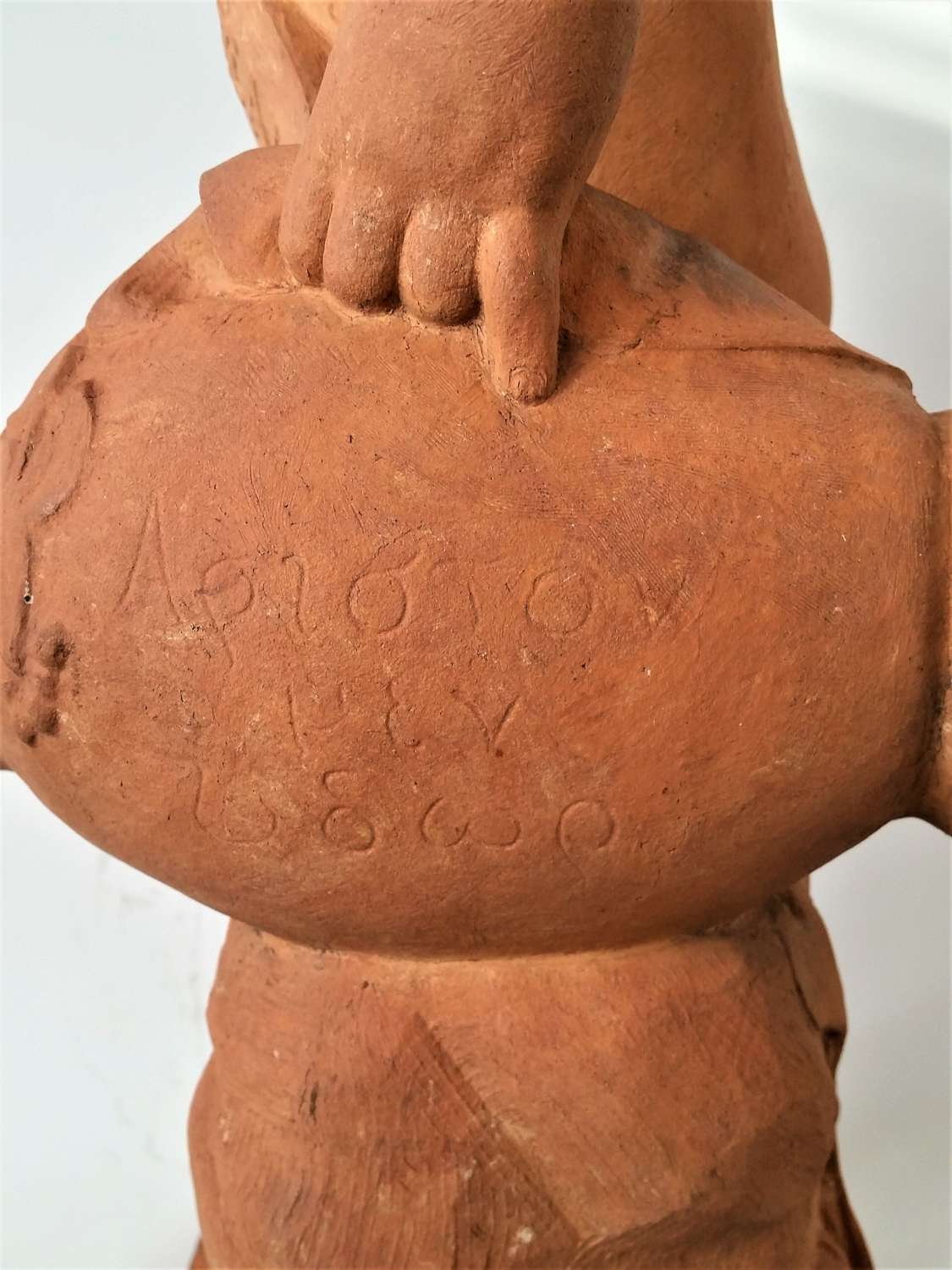 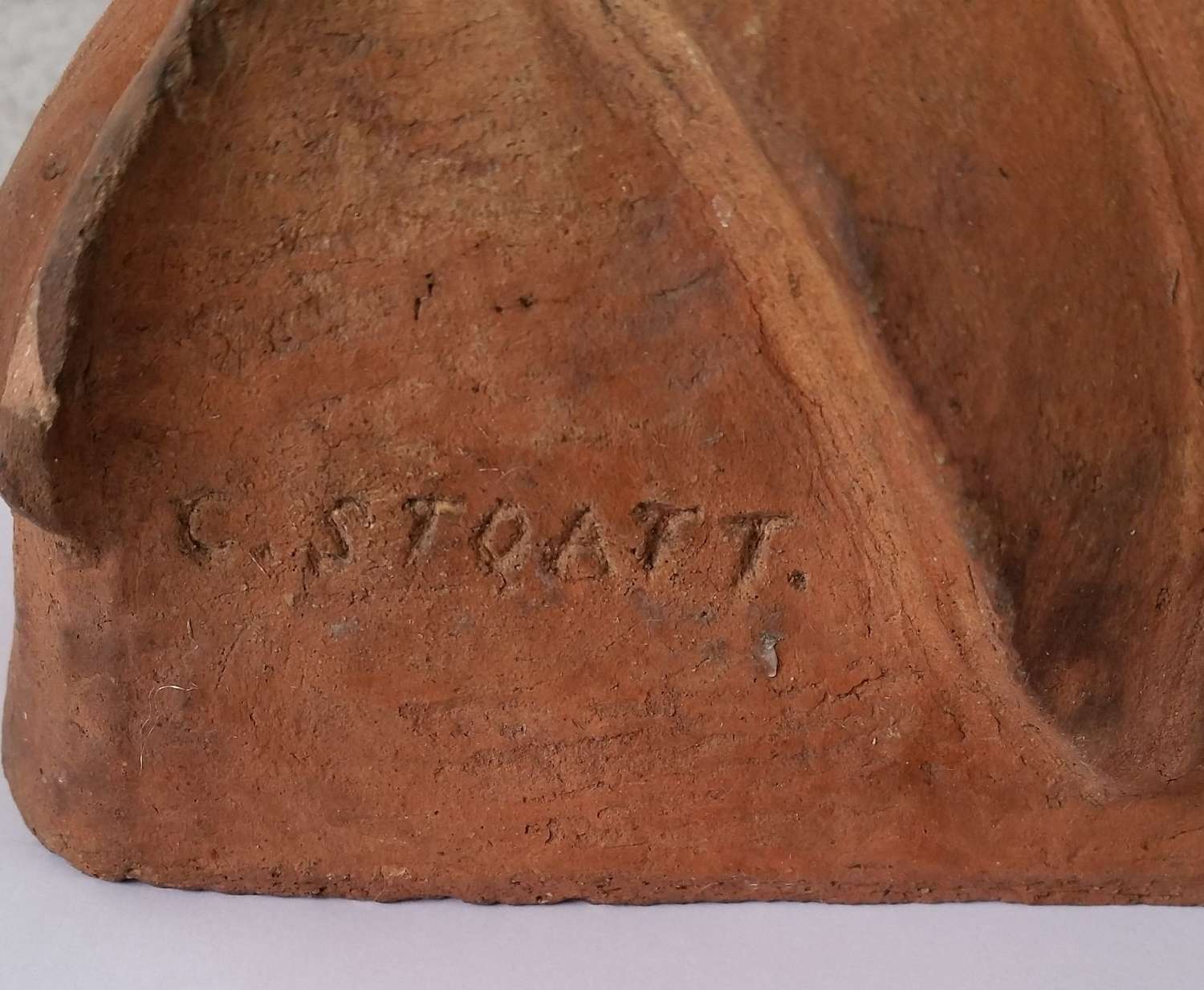