Known for his monumental, architecturally inspired works, Jeff Lowe's sculpture demonstrates an intense engagement with material, surface and design. A student of the generation of British sculptors that emerged in the 1960's, Lowe studied at the Saint Martin's School of Art between 1971-75, under sculptors, William Tucker, Philip King and Anthony Caro.

Jeff Lowe came to prominence at the age of 21, whilst still a student at Saint Martin's, through his first solo exhibition at the prestigious Leicester Galleries in London's Cork Street in 1974, before going onto represent Britain at the Paris Biennale. He was awarded the Sainsbury Award in 1973, and the Pollock-Krasner in 1993.

A prolific and experimental maker, Lowe made a series of monolithic inspired sculptures in the 1990's. These large scale works have titles such as 'Sphynx', 'Egypt' and 'Karnak'. This piece is simply titled 'Statue' but the inspiration is taken from the monumental ancient Egyptian statues such as those at Abu Simbel.  A full scale piece along with other monumental sculptures was exhibited in at Maak Gallery in 1992. 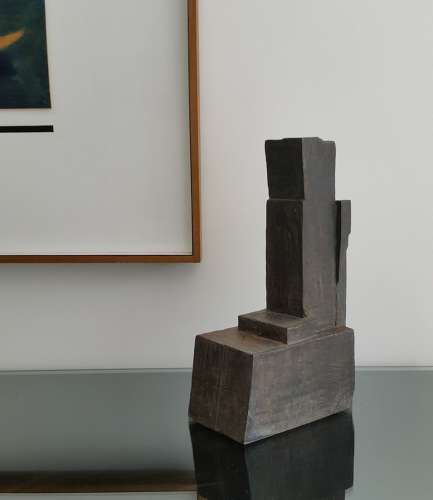