Pencil ink and gouache on grey paper.. images on both sides.

Hans Bellmer was born in Kattowitz in 1902. At his father's insistence, he worked in a steel factory and a coal mine after finishing the examinations qualifying for university admittance. Nevertheless, Bellmer managed to do some art work and exhibit it in Poland in 1922/23.

In 1924 Bellmer dropped out of engineering, worked as a book printer and then as an illustrator for Malik Verlag.

That winter Bellmer took his first trip to Paris. After his marriage in 1927, Hans Bellmer worked as a commercial artist, attended lectures at the Bauhaus in the early 1930s and travelled to Italy and Tunisia. He refused to continue working as a sign of resistance to Fascism in 1933. To show his opposition to Fascism and the aesthetic it propagated, Hans Bellmer began to construct lifesize three-dimensional dolls, which he photographed in erotic poses. Some of these works were published by Bellmer at his own expense in 1934, others appeared in the Surrealist journal "Le Minotaure", ensuring Bellmer important ranking among Paris Surrealists.

In 1938 Hans Bellmer emigrated to Paris and was interned with Max Ernst on the outbreak of the second world war in the "Les Mille" camp near Aix-en-Provence. On being discharged from the camp, Bellmer renounced German nationality in 1941 and fled to Castres, where he married his second wife that same year.

In the post-war era Bellmer succeeded in rendering the subconscious aspect of sexuality in intoxicatingly hallucinatory dream pictures, working with the precision of the Old Masters and soon supplementing this approach with an infusion of Mannerist influences and beautiful, fluid line.

In Hans Bellmer's mature late work, line is refined to a filigree tracery, the eroticism is even more pronounced, partly because death is now included as the opposite pole of lust.

Bellmer died in February 1975, bequeathing an œuvre informed by obsession and comprising objects, photography, drawings, some prints and oil paintings, in which the representation of obscenity expresses a rebellion against society, conventional rationality and the Zeitgeist of the times in which the artist lived. 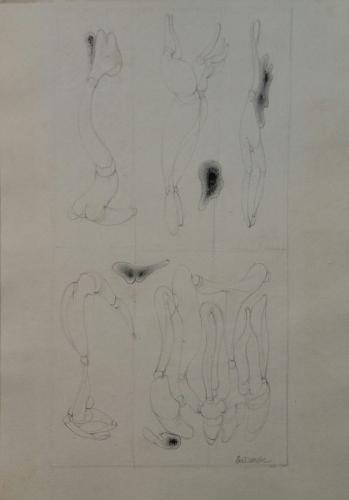